Do we run into any challenges with publishers if SportRχiv assigns a DOI before a publisher that accepts a paper?

Do I lose copyright privileges when I submit a document to the archive?

Won’t it look bad if I have to change a manuscript substantially after peer review?

Science should be accessible only after it has been peer reviewed, shouldn’t it? Peer reviewers, as gatekeepers of science, limit the thicket of information/documents scientists produce. Without them, won’t we become over run with bad science?

Despite the very good intentions of the SportRχiv initiative, there will be researchers that view it skeptically and as a mechanism to “publish” half-baked work or corrupt the traditional review process.

Will posting on the archive affect subsequent attempts to publish in a journal? 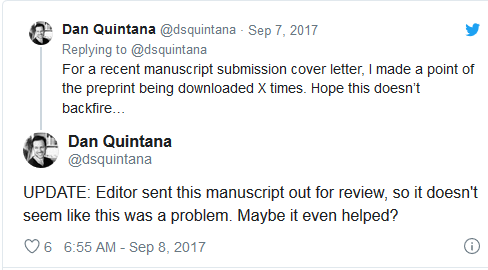 Is this service a replacement for journals?

How should I cite articles on the archive?

Won’t someone steal my work if I share a preprint before it’s accepted for publication?

May I remove a preprint once it is posted?

We are powered by STORK please consider donating to support this free service.